The focus of MBA has since its beginning been on preaching the gospel and bring people to relationship with Christ. Church leaders have watched the increase of vulnerability, poverty and disease and in recent years started to explore ways in which churches can play a more active roll in civil society, addressing the needs of the community in a way that cares for both spiritual and physical needs. 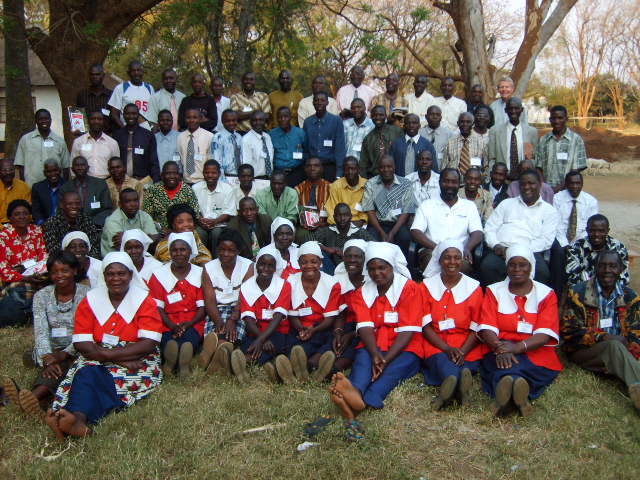 Church leaders discussed the churches roll in civil society as part of the Development Project 2007-2009. Specifically the churches response to HIV/AIDS was discussed at seminars in August 2008. The churches response to this challenge will continue to evolve in coming years. We see that the stigma for discussing this challenge in our church setting is being broken. In 2009-2010 the topics Poverty Reduction and Food Security issues are being explored.

Churches have awakened to awareness that they, the Church, needs to do more to play a roll in their community including care for orphans and widows.

THE CHURCH HAVING AN IMPACT

God is up to something. Churches of MBA are developing a new mindset, moving away from being recipients of aid to becoming givers of aid. Leaders in several of the churches of MBA have not been waiting for outside help, but have begun the process to educate and motivate their local churches. Programs are popping up here and there, empowering the vulnerable, the widow, orphans and aged, and providing physical assistance to them. Allow us to share about churches taking new steps in responding to the needs in our communities. Other churches of MBA are in this process and we look forward to sharing more stories with you as they reach us.

CARE FOR WIDOW AND ORPHANS

The story of what two gifts has started: WIDOWS CARING FOR WIDOWS

GIVING THE LITTLE WE HAVE

Ibenga Baptist Church, Pastor Rev Jackson Chiyeng
Ibenga Baptist is typical of many of the church of MBA. Members are rural farmers and only a few members have employment, (a few as health care workers at a local hospital and another few as teachers). As the church saw the needs around them they began by identifying the widows, orphans and aged in their communities (member and non-members) that were in special need of assistance. Members contributed anything they could, bringing items or food. A special day was planned to invite people that had been identified. A meal was prepared using donated food. At the gathering they shared the from the Word, served the meal and distributed items that had been donated.

It began with teaching. For one month Pastor Chinyakasa preached on the churches responsibility. The church recognized that many of their own members had needs that weren’t being met. As a response a day was planned where everyone could contribute, even those that don’t have much gave whatever they could. The items were then distributed to those with need. The initiative was so positive for the church that now these special days are planned once every quarter.

EMPOWERING TO SELF SUSTAINABILITY

The church does have responsibility. Following preaching on that subject Chinwa Baptist wrestled with “How can we not only alleviate immediate needs but turn the tide, reducing future needs?” The church’s response was to identify widows, orphans and the aged in their community (members and non-members), and to invite them for a meal. There a process of empowerment was begun. Beyond giving this group of vulnerable people nourishment they gave them encouragement. The group was encouraged to see that they have potential, that they have the power to be self sustainable. The church gave them kernels of ideas on how this could be possible, what income generation ideas could be used, even if just on a small scale. By giving them a new mindset, a new perspective, the church has taken steps to start their journey from poverty to sustainability.

FIELD PROJECT FOR WIDOW AND ORPHANS

This church, which very warmly hosts many visiting volunteers, is a church planting church, having planted 27 churches in the Central Province since 1969. As the economy was becoming bad, the local church leadership had a burden of resource mobilization and was inspired by the Lord to come up with a field project to support the growing challenges due to the ever increasing needs such as O.V.C. and Widows. The project is a 3 hector field where maize is grown. Part is sold to cover church costs and the rest is distributed. Most of the church members are farmers so this Income Generation program fit with what church members already could do. They have identified 54 widows and orphans in a church of 150 members. They are struggling to meet the needs. The project gives the church enough maize to give to these 54, but only enough to last them for 2 days/year. It is difficult and feels like just a drop in an Ocean. There are several other Orphans, Aged, Widows and Destitute who need support in our community but due to resource limitations, they are unable to serve them. They access a government Fertilizer Support Program that gives subsidized fertilizer. The field hasn’t been fully utilized yet due to lack of resources and land acquisition is not a problem since land is available but resource limitations keep them from expanding the program.

PARTNERING WITH OTHER CHURCHES – GOATS FOR ORPHANS

Churches of Mpongwe District, in partnership with Apostolic Pentecost and Scandinavian Barnmission
There are other ministries in Mpongwe also wrestling with how to meet the needs of orphans. One ministry invited us into their project. So far we have distributed 60 goats and will be distributing an additional 40 goats. 15 of MBA’s churches in Mpongwe district have been selected to facilitate this. The churches identify orphans in need. They are then each given two goats (male and female). The first offspring will be returned and distributed to additional orphans. We are thankful to not only be able to meet needs of orphans in our villages but to also through this invitation have the opportunity to get to know our neighbouring ministries. Each of these programs has a different strength. As these are fresh initiatives they haven’t heard about each other yet. At coming conferences when they network and share we look forward to watching how these initiatives will be an inspiration not only to the churches involved but to other churches of MBA.

The members of the churches of MBA are themselves mostly under resourced, but many members all over MBA have personally taken orphans into their care. MBA’s Staff are not immune to the challenges of orphans. When a brother dies of HIV/AIDS, leaving 5 children, the whole family is affected and life changes. His siblings each enfold several children into their homes, and combine their stretched resources to ensure the children get an education.

MBA is looking at ways to more effectively support the work of churches related to the large numbers of ophans in their village. Be praying for this development! At this stage our specific pray request is for a coordinator to empower churches as they expand their orphan programs.