Malaria is one of the leading causes of death for children in the developing world and in our region. It has been estimated that two to three million people die of malaria worldwide every year, 90 percent of them in Sub-Saharan Africa. Those who die in Africa are mainly pregnant women and children. The Zambian Ministry of Health estimated that there are more than 3.5 million cases and 50,000 deaths due to malaria every year. In Zambia, malaria accounts for 37 per cent of all outpatient attendance at the health facilities. Productivity is adversely affected because when malaria strikes it makes patients weak, resulting in employers losing man-hours. The search for a cure for the disease is a priority. 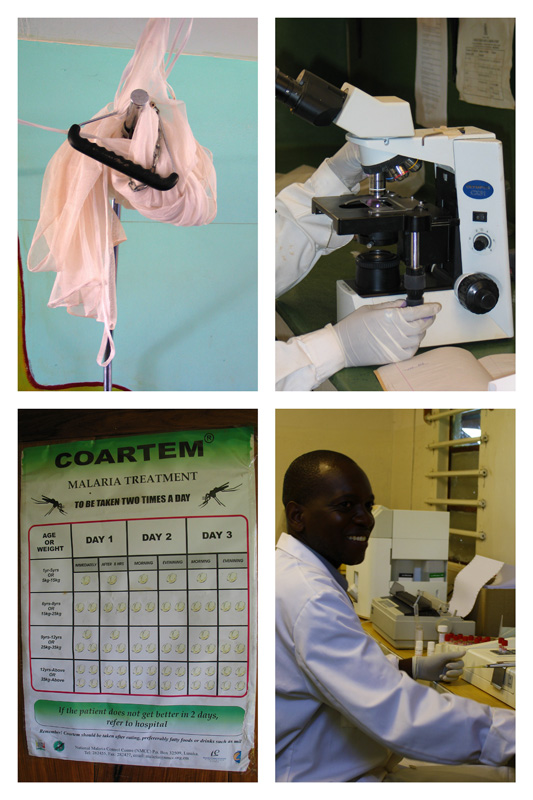 Mpongwe Mission Hospital is active in contributing to the care and prevention of this debilitating and lethal disease in several ways: MMH is running a series of special programmes which include

Diagnosis: Improved testing has led to more reliable diagnosis, even out in the villages.

Care: The hospital provides care for thousands of patients suffering from Malaria every year, often children.

Vaccine Research: MMH is a key player in an important research project with the goal of finding an effective vaccine for Malaria (funded in part by The Bill and Melinda Gates Foundation). Through the research components people around the world in malaria affected areas can benefit in the future. Mpongwe Mission Hospital is glad to contribute to research that what could be another dimension of combating malaria in Zambia and Sub-Saharan Africa

Positive changes – Program having an impact!

Thankfully we see a noticeable drop of malaria cases due to the effectiveness of prevention programs as well as a 75% decrease in the death rate (in 2008). In addition to the work the hospital does there were community wide spraying programs done must prior to the raining season. The combined impact of the programs is having an impact and we anticipate that 2009 will be even better.

Some of our visitors wonder what it is like to live with Malaria. We had a visiting volunteer ask “Have you ever had Malaria?” Yes, most all of us have had malaria and can tell you about how is has kept us from work or school, or even taken us to the brink of death. People in Mpongwe ask can tell you their stories. We are proud to be part of an organization that is changing this by actively working to prevent Malaria in many ways.

The malaria parasite’s resistance to anti-malarial drugs and insecticides is a major health concern. Resistance to cheaper anti-malaria drugs has forced countries to change their approach toward more expensive drugs. In Zambia the problem of parasite resistance to chloroquine, has necessitated the drug policy change to Coartem. However, Coartem is an expensive drug and Zambians have not been able to afford it thus making it not sustainable in the fight against malaria.

Over the years, according to the Tropical Diseases Research Centre (TDRC) the level of treatment failure to Chloroquine has gone up to 40-60 per cent. Given the history of the disease’s resistance to chroloquine, it is feared the killer disease will again develop resistance to coartem as well, hence the need to find more alternatives to contain malaria, which is caused by the female anopholese mosquito.

Why Mpongwe?
Mpongwe district is currently ranked among the highest in malaria ratings. Malaria is the major cause of illness across all age groups in the district. There are many reasons why Mpongwe has been considered to pave for vaccine trials.

One of them is that: Mpongwe Mission Hospital has a spacious well-ventilated laboratory equipped with a microscope, a refrigerator and an old centrifuge. The laboratory acquired equipment like the hematology analyser, chemistry analyser, and a distiller. Also the district has a stable communication network. Apart from good communication, Zambia is a suitable country for such a site as it is malaria endemic with high transmission rates.

Malaria clinical trials were necessary to roll back the disease and the Mpongwe project being one of the areas highly affected by the disease. There is no question about it. Malaria is a big problem. The need for a cost-effective long term solution to the malaria problem was not only a health matter but a developmental one. Although malaria is preventable and curable, its socio-economic impact remained a major challenge. Officials on both a regional, national and continent wide level welcome the developing of Mpongwe site for malaria vaccine trials.

An update on the vaccine trails January 2007

A vaccine has been developed but the score when it was used as a preventive measure against malaria in Tanzania was low, but the good news is that progress has been made in this regard. Scientists at Zambia’s Tropical Diseases Research Centre (TDRC) in Ndola, are re-testing the vaccine to see if it can score a higher percentage as a preventive measure. “For a vaccine to be accepted, it must score a minimum percentage of 30 percent, explained Dr Emmanuel Kafwembe, the TDRC director. He said research work was being conducted on the vaccine at other research centres in Africa. Once the research finds that the vaccine has a higher percentage, Dr Kafwembe says, the breakthrough would benefit the entire continent.

Africa Malaria Research Network Trust (AMANET) has sponsored the project being conducted in Zambia to the tune of 250, 000 Euros (about P200,000). The money has been released to TDRC for the two-year programme at Mpongwe, a rural district on the Copperbelt. Currently, TDRC is gathering data on malaria from the people in Mpongwe and also getting blood samples from patients in the same area for analysis.

Commenting on the shift to other malaria drugs, Dr Kafwembe said the advantage with the phased out chroloquine was that it was a single drug, which had the ability to reduce the body temperature in patients. The latest and presently effective coartem “is unlike chroloquine” because it is a combination of several drugs. As with any other drug, there are complaints about coartem mostly from women. “TDRC recently trained nurses to receive complaints about coartem from pregnant women in clinics,” Dr Kafwembe explained.  “We have asked pregnant women to fill a questionnaire about the complaints they have after being treated with coartem,” Dr Kafwembe said. Pregnant women with complaints outside the jurisdiction of the research have been asked to see district health directors. With resistance being developed against malaria, people are being encouraged to sleep under mosquito nets. Several people in sub-Saharan Africa do not use insecticide-treated mosquito nets due to several economic factors. This is the region in which on average more than two people in every three live on less than a dollar a day. This brings the issue of people choosing between buying a mosquito net and spending the hard earned Kwacha on food or other basic needs.

The hospital Mother Child Health clinic plays an important roll in making the nets available to all new mothers in the district.

Malaria is caused by a parasite called Plasmodium, which is transmitted via the bites of infected mosquitoes. In the human body, the parasites multiply in the liver, and then infect red blood cells.  Symptoms of malaria include fever, headache, and vomiting, and usually appear between 10 and 15 days after the mosquito bite. If not treated, malaria can quickly become life-threatening by disrupting the blood supply to vital organs. In many parts of the world, the parasites have developed resistance to a number of malaria medicines. Key interventions to control malaria include: prompt and effective treatment with artemisinin-based combination therapies; use of insecticidal nets by people at risk; and indoor residual spraying with insecticide to control the vector mosquitoes.

Learn about the illness and death caused by malaria.

A top killer of children

Malaria is one of the leading causes of death for children under 5 in the developing world, resulting in approximately 800,000 child deaths per year. Hitting Africa the hardest, malaria kills more than 1 million people each year — approximately 80 percent of whom are children (1) — and infects between 350 million and 500 million individuals. (2) Pregnant mothers and babies are particularly vulnerable. Every year, malaria is responsible for as many as 10,000 maternal deaths (3) and results in maternal anemia, spontaneous abortions, neonatal deaths, and low birth-weight babies.

Malaria is both preventable and treatable. Yet many die because prevention and treatment tools are not readily available to the people who need them most. Simple solutions such as sleeping under a treated bed net, spraying insecticide inside homes, and using the right anti-malarial drugs dramatically reduce the impact of malaria. Not only that, studies have shown these solutions protect against other health risks for children under 5. For instance, in sub-Saharan Africa, the use of insecticide-treated bed nets could potentially prevent 1 million child deaths. (4)

A disease of poverty

Malaria afflicts primarily the poorest populations who tend to live in malaria-prone areas. And lack of nutrition makes children and adults even more vulnerable. According to the World Food Programme, 57 percent of malaria deaths are attributable to under-nutrition. (5) The disease seriously impacts Africa’s economy, slowing economic growth and development and perpetuating the cycle of poverty. For the hundreds of millions of people around the world living on less than $2 per day, life-saving interventions remain unaffordable and inaccessible.

In 2007, malaria and AIDS together took more than 3 million lives. And there is increasing evidence that where they occur together, malaria and HIV (PDF) infections interact. Malaria worsens HIV by:

*As a part of a search for alternatives to combat the scourge Mpongwe district was selected as a site for vaccine trials. The two year project was funded by the African Malaria Network Trust (AMANET) with the objective of sponsoring malaria clinical and field trials.“So much is said about HIV/AIDS, but malaria is a major public health concern. More practical steps needs to be taken to fight the disease,” said Ms Siachinji who is heading the Mpongwe project. Malaria is the leading cause of morbidity and second highest cause of mortality among pregnant women and children under five.